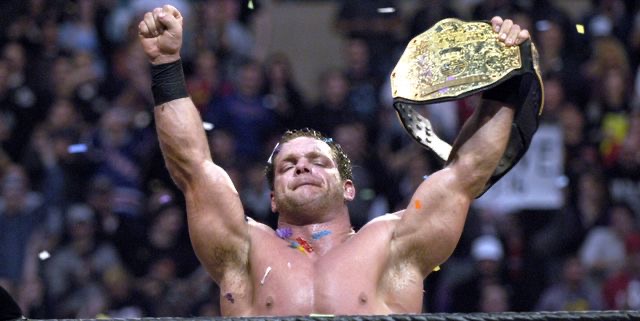 The “Rabid Wolverine” , that name will instantly bring memories of one of the greatest technical wrestlers to the minds of 90’s & early 2000’s wrestling fans. His wrestling career lasted 22 years and during this time he won just as many major wrestling championship titles. Yet, you will never see the name Chris Benoit in any wrestling hall of fame, you won’t find it in the name of matches or the episode information box when watching old episodes of “Raw” of “SmackDown!” on the WWE app. Most fans who just got into wrestling in the 2010’s don’t know his name or might only know one thing about him. He is the champion who turned into a ghost, the champion the WWE would like to erase from their history.

Christopher Michael Benoit was born in Montreal, Canada on May 21, 1967 to Michael & Margaret Benoit. He grew up Edmonton and was described as a strong willed and obsessive child. It was here that at age 12 he decided he wanted to be a professional wrestler after watching Tom “Dynamite Kid” Billington and Bret Hart at an event. He trained under Stu Hart and joined his Stampede Wresting organization in 1985 & in 1986 went on to join New Japan pro wrestling. He left the former company in 1989 and the latter in 1994. During this time Benoit also started working with the World Championship Wrestling & Extreme Championship Wrestling organizations. After a brief hiatus he returned to WCW in 1995 as part of “The Four Horseman” alongside Ric Flair, Arn Anderson & Brian Pillman, it was during this time that he stood out in the “cruiserweight” division for his speed and strength inside the ring.

In 2000 Benoit joined the World Wrestling Federation (now known as the WWE) where he became part of the group “The Radicalz” alongside Eddie Guerrero (RIP), Perry Saturn, & Dean Malenko. In 2001 Benoit parted ways with “The Radicalz” and teamed up with Chris Jericho ( my all-time favorite wrestler) to defeat Stone Cold Steve Austin & Triple H for the tag team title. in 2002 Benoit move from “Raw is War” to “SmackDown! where he started a feud with Kurt Angle (who I can’t stand). In October of 2002 he teamed up with Angle to once again claim the tag team championship title. In 2004 Benoit challenged and defeated Triple H for the World Heavyweight Championship title. In 2005 Benoit spiraled into a deep depression after his best friend and former teammate Eddie Guerrero passed away suddenly. Some say it is this depression that came to a head in 2007 with tragic results.

On June 25, 2007 police discovered the bodies of Chris Benoit, his second wife Nancy, and their 7 year old son Daniel inside their Fayetteville, Georgia home. The discovered stunned the world and the WWE who cancelled a scheduled episode of RAW and aired a tribute to Benoit instead. Seems pretty cut and dry right? he Benoit family were victims of a home invasion that went terribly wrong……well, not exactly. Shortly after the discovery of the bodies the world was stunned again when the press released that Benoit had in fact killed his wife and young son before killing himself. It was suspected that on June 22, 2007 Benoit strangled Nancy to death with a cord. On June 23, 2007 he went on to kill his Daniel by suffocating him while he was lying in bed. After the murders Benoit took some time to himself before committing suicide by tying the cord from his pull down machine around his neck then releasing all the weights attached to the other end, causing his neck to break almost instantly.

This information left everyone with unanswered questions, especially those who were closest to Benoit. So was Chris Benoit just plain evil? I like to think not. Here are some factors that have been contributed to this horrific crime :

Steroids – The biggest thing people jump to when trying to figure out what went wrong is the infamous “roid rage”. It is pretty common knowledge that most professional wrestlers including Benoit took steroids in the 2000″s to keep their physical appearance and energy levels up. Although, many other professional wrestlers spoke out against this claim stating that after the passing of Eddie Guerreo in 2005 the WWE got very strict with their steroids policy. Others have spoken out against this claim stating that their were still ways for wrestlers to get their hands on the performance enhancing drugs. Police founds text messages Nancy sent to Chris stating that she was tired of having to deal with his “roid rage”. Can a person experience “roid rage” over a three day span or was this a deliberate and well though out act committed by the perpetrator?

Brain Trauma – Over the years we have learned about the overwhelming effect that repeated concussions can have on the human brain and more studies have come out regarding CTE. We have all seen it when watching wrestling a chokeslam in the ring, a chair to the back of the head, or a hard fall into a table, wrestlers are no strangers to head injuries. After Benoit passed away they took a good look at his brain and discovered that he was suffering from severe CTE. Although he was just 40 years old at the time of his death Benoit had the mind of an 85 year old Alzheimer patient and that he was on a fast track to early Dementia. After this incident the WWE would go on to ban chair shots to the head. The CTE defense was visited once again during the Aaron Hernandez case who at the age of 27 had the brain of someone in their 70’s ( that is a story for another day). Can your brain get to a point of being so damaged that it can completely change who you are? Can brain trauma cause a person to become a monster or is this rage something that has to be in you in the first place?

Depression – It has been mentioned time and time again, after the passing of Eddie Guerrero Benoit was devastated and spiraled into a deep depression. I know first hand the effect that depression can have on your mind and let me tell you it’s not pretty. Suddenly a man who was rather stoic in and outside of the ring is overcome with all these overwhelming emotions of sadness. Even though he was the “Rabid Wolverine” at the end of the day he was still a human being. Is it possible that Benoit was so severely depressed that he wanted to end his own life? Could the guilt of leaving his wife and young son behind have caused him to murder them? Could he have been in such a low state of mind that he just snapped?

This last theory is my personal favorite and one that I personal think needs to looked deeper into.

All Three Were Murdered – I know, I know you are all sitting there thinking; “Nikki you are just saying that because you enjoyed watching him wrestle when you were growing up.” Hear me out! Toxicology reports showed that at the time of his death Benoit had a mix of painkillers, alcohol, and other prescription drugs. I would assume a mix of these substances would make it almost impossible for Benoit to set up his the pull down machine and commit suicide in the way he supposedly did. Also, 14 hours before any of the bodies were discovered someone uploaded the date of Chris Benoit’s death and the incident that caused it to his Wikipedia page. This anonymous person would later go on to say that it was all just a crazy and tragic coincidence…..Mhhhhhmmmm.

13 years later and we are still left wondering was Chris Benoit a gentle giant that snapped after years of brain trauma and turmoil or was he just someone born evil who put his family through years of abuse that resulted in a planned out event that took place over the course of three days? Does he really deserve to be erased from professional wrestling history or should he be known for his major accomplishments within the industry?